This is an old probability teaser which came up in the context of a mathematics blog I read recently: the Monty Hall problem.

Links - to Machiavelli stuff and Schelling segregation model, including it being illustrated visually

Next I’ve included links for the Schelling segregation model, which is the “game” we’ve thus far considered.

And finally an animated rendering of Prisoner’s Dilemma, which was the first of zero-sum games. Note that Schelling goes way beyond zero-sum; he includes cooperation, bargaining, negotiating. Core to his work are the situations, but I won’t go into that here. These are just links.

The first two links are versions of the Machiavelli Personality test. The third of the links is from the two people who developed it – Christie and Geis. The last link is the one that has the diagram of the Machiavellian space.

Schelling and his Segregation Model

First a very short interview with Schelling just after he was awarded the Nobel Prize. It gives the context of who he is and how he’s worked.

The segregation model itself. I found that Schelling wrote a book for a general, non-specialist readership. It’s titled Micromotives and Macrobehaviour, originally published in 1978 and re-published in 2006. And Chapter 4 in it (pages 137-166) is ‘Sorting and Mixing: Race and Sex’. He explains the segregation model in simple terms, as distinct from the lengthier version for his peers.

The chapter is available online. The link is:

In the event that you want to see how the segregation model works before venturing into the article, there is a video that explains what it is.

Tim Harford writes for the FT as the Undercover Economist. In his book The Logic of Life: Uncovering the New Economics of Everything, he has probably the simplest, most accessible description of the segregation model. It’s chapter 6 of the book - not available online.

Another visual rendering is Andrew Crooks version of Schelling’s Segregation Model, now on Second Life. He uses houses rather than brown and white eggs, as Tim Harford does.

The Crooks link is:

Finally, there were Reith Lectures, the ones on trust (deception and trust being core game-theoretic principles). As part of the website there is an interesting interactive Prisoner’s Dilemma illustration. The link is : 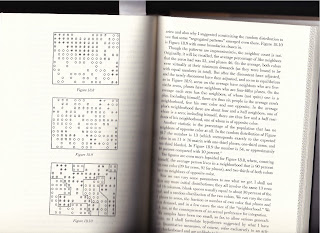 From Ken Binmore’s Playing it for Real: A Text on Game Theory

‘A game is being played whenever people have anything to do with each other. Romeo and Juliet played a teenage mating game that didn’t work out too well for either of them. Adolf Hitler and Josef Stalin played a game that killed off a substantial fraction of the world’s population. Khruschev and Kennedy played a game during the Cuban missile crisis that might wiped us out altogether.

I was looking through my notebooks and I thought these quite good. I do like the idea of game theory having the advantage of being naked and therefore seeing its limitations is a lot easier.

From Preface to Thomas C. Schelling’s Choice and Consequence: Perspective of an errant economist.

We figure what a person might do by putting ourselves into his position, as best we understand that position, adopting for the purpose as much as we know about his own preferences and deciding what he ought to do. By “what he ought to do” we merely mean what he should decide in accordance with his own aims, values, and objectives, given the alternatives that he faces.

Then from Chapter 10, ‘What is Game Theory’ in the same book.

There is no independently “best” choice that one can make: it depends on what the others do. pg. 214

Game theory usually supposes – a man’s ethics are what have recently been called “situation ethics”; he is concerned with outcomes, not intermediate processes. . . . The decision-maker is assumed not trying to be boldness or novelty, not trying to surprise us for the sake of surprise itself; he is not concerned with why his partner may choose a particular strategy, but what strategy his partner will choose. Nothing but the outcomes enter his value system. If a man has good will or malice toward his partner, a conscience or a bent for mischief, it is all assumed to be reflected in his valuation of the final outcomes. It is assumed that all the elements of his value system are displayed – everything that matters to him is allowed for – in the ranking or valuation of cells in the matrix. pg.240.

Game theory does often have the advantage of being naked so that, unlike those of some less explicit theories, its limitations are likely to be noticeable.

“Game theory” – the name has frivolous connotations. It is also easily confused with gaming, as in war gaming, business gaming, crisis gaming – confused, that is, with simulations of decisions or conflict. 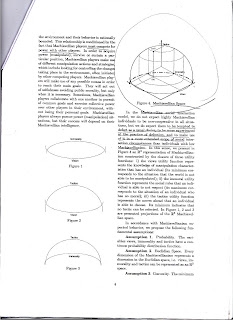 Okay, I'm taking a couple of passages from Blindness that I know you like and what I’m trying to explore is what might be extracted from them in terms of possible improvisation starting points. Basically, I’m thinking about how to cross from ‘intellectualized’ ideas to something tangibly theatrical. Or at least the possibility of going into theatrical territory.

FROM BLINDNESS BY JOSE SARAMAGO

On their way to the home of the girl with dark glasses, they crossed a large square with groups of blind people who were listening to speeches from other blind people, at first sight, neither one nor the other group seemed blind, the speakers turned their heads excitedly towards their listeners, the listeners turned their heads attentively to the speakers. They were proclaiming the end of the world, redemption through penitence, the visions of the seventh day, the advent of the angel, cosmic collisions, the death of the sun, the tribal spirit, the sap of the mandrake, tiger ointment, the virtue of the sign, the discipline of the wind, the perfume of the moon, the revindication of darkness, the power of exorcism, the sign of the heel, the crucifixion of the rose, the purity of the lymph, the blood of the black cat, the sleep of the shadow, the rising of the seas, the logic of anthropophagy, painless castration, divine tattoos, voluntary blindness, convex thoughts, or concave, or horizontal or vertical, or sloping or concentrated, or dispersed, or fleeting, the weakening of the vocal cords, the death of the word, Here nobody is speaking of organization, said the doctor’s wife, Perhaps organization is in another square, he replied. (page 282)

They crossed [another] square where groups of blind people entertained themselves by listening to speeches from other blind people, at first sight neither group seemed to be blind, the speakers turned their heads excitedly towards the listeners and the listeners turned their heads attentively to the speakers. They were extolling the virtues of the fundamental principles of the great organized systems, private property, a free currency market, the market economy, the stock exchange, taxation, interest, expropriation and appropriation, production, distribution, consumption, supply and demand, poverty and wealth, communication, repression and delinquency, lotteries, prisons, the penal code, the highway code, dictionaries, the telephone directory, networks or prostitution, armaments factories, the armed forces, cemeteries, the police, smuggling, drugs, permitted legal traffic, pharmaceutical research, gambling, the price of priests and funerals, justice, borrowing, political parties, elections, parliaments, governments, convex, concave, horizontal, vertical slanted, concentrated, diffuse, fleeting thoughts, the fraying of the vocal cords, the death of the word. Here they are talking about organization, said the doctor’s wife to her husband, I noticed, he answered, and said no more. (page 294)

So if one were to juxtapose these for Viewpoints Composition, possible ‘titles’ for a task: